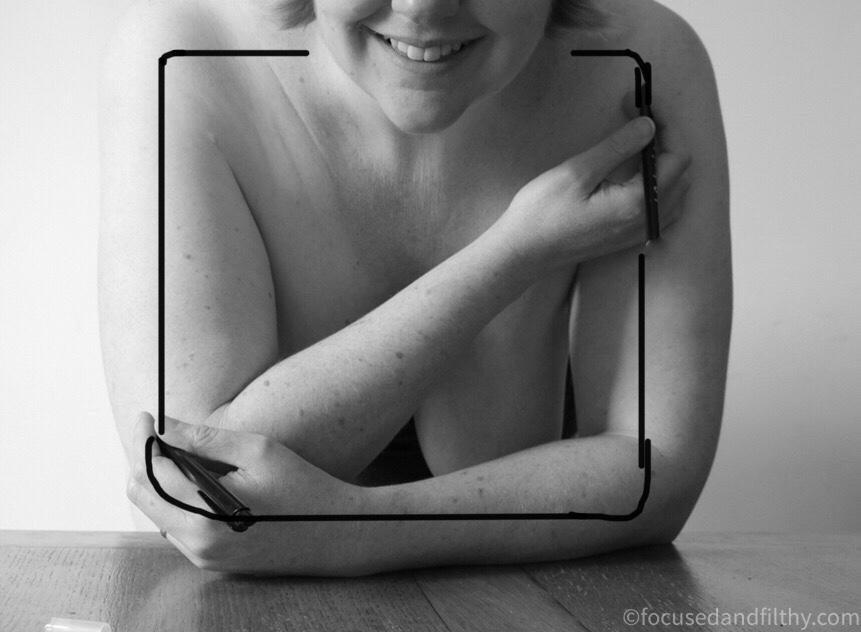 I saw this photograph online and it really grabbed my attention. It’s by the artist Lin Young Chang My first thought was ‘I could maybe do that’ …. but my second thought was more considered ‘but is it physically possible?’ I learnt the hard way in the past that some photographs are just not possible because they have photoshopped and messed about with in post editing. I’d get upset during a photo shoot that I just couldn’t get the angles right and end up despondent and deflated.

Looking at this image I thought there maybe a few issues and asked online what people thought. My concern was the head seemed to be stuck on and maybe it wouldn’t be possible to line up a hair parting. It was also pointed out to me that the line seems to have been added afterwards because there is some overlap to the head. Also the arms seem unnaturally straight with no muscle bulges at all.

As I like a challenge I thought I would try to get the image myself. Finding two plain black pens was my first issue. Then it was getting lined up. My head will not turn that far round so I couldn’t get my nose anywhere near pointing too my shoulders. So I opted for a straight on look and thought I’d try and draw on the lines in editing to match up to my smile line. This is the original image I got.

I know I’m not skinny or particularly long armed but there is no way at that angle the arms look so straight in the original. I did a really quick edit and drew on some lines but my skills in photoshop aren’t great so I didn’t fancy doing too much editing. My quick version is this black and white image.

But the original image I took seemed to hold such potential I thought others might like a go. So I headed onto social media and asked friends to doodle in the lines or images for me. The results were fantastic. So much better than expected and several made me laugh so loudly. I wanted to share all of them. I’m sorry if I’ve missed any off.

I want to thank everyone for playing along and I hope you enjoy them too.